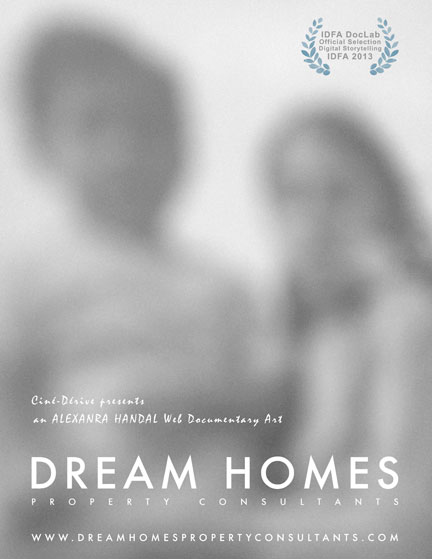 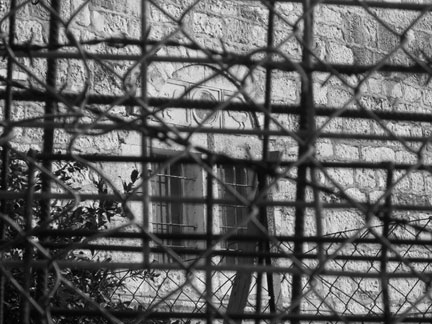 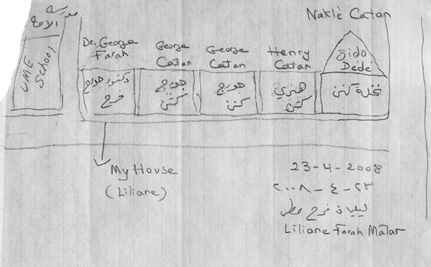 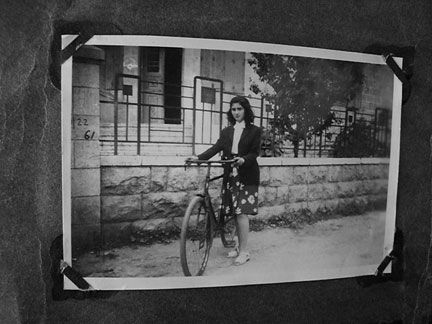 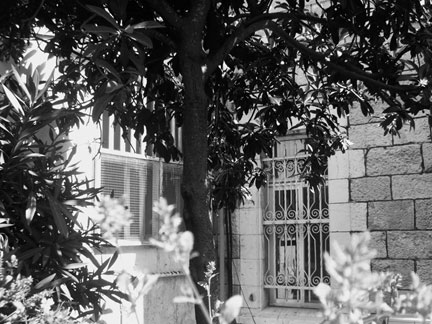 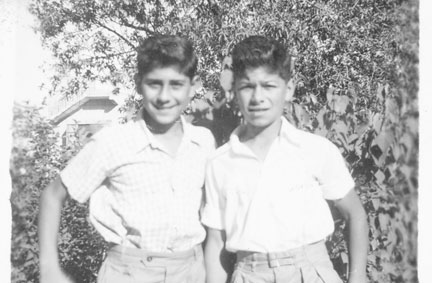 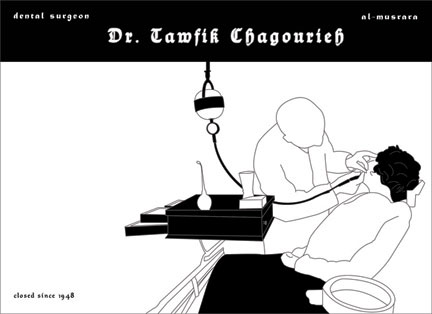 Expropriated Palestinian houses are ironically repackaged on the Israeli real estate market as 'Arab-style'. Their factual history is concealed behind this architectural euphemism. Taking the form of an on-line estate agency, this web documentary art revisits the individual history of these homes, uncovering Palestinian stories of displacement, dispossession and cultural cleansing from West Jerusalem. Built over the course of six years, DHPC delves into the memories of 28 Palestinian refugees and exiles, creating a labyrinthine space where personal tales of abrupt goodbyes, impossible reunions and suspended dreams are conveyed with a tragicomic edge. The 18 homes featured under 'Hot Properties' are each referred to by a tongue-in-cheek listing such as: 'One-of-a-Kind Arab-style House, Dead End Street' and 'Magnificent Arab-style House, A Great Catch'. Directions on how to reach a particular property are not given by current official street names, but through the description of landmarks and other familiar points that allude to a torn social fabric. The eradication of this universe finds expression in animated advertisements of barbershops and shoemakers that no longer exist or through Internet response status codes, such as 'not found'. Using diverse storytelling genres with different modes of narration, DHPC patiently and meticulously pieces together a world that was shattered in 1948.

There was no singular beginning.

Discoveries on foot, in cyberspace and through encounters crisscrossed, leading to its creation.

I once met a Palestinian exile in NYC who showed me an advertisement in a magazine that featured upscale residential properties in West Jerusalem. At first glance it looked like an ordinary advert. Soon however an absurd political reality became apparent. The house in question was this Palestinian man's expropriated family home emptied of its Arab history and put on sale for an exclusively Israeli Jewish international clientele. With this paradox in mind, I began browsing through Israeli real estate websites to see what had become of areas of the city that I have limited access to as a Palestinian. I learned that confiscated Palestinian houses in West Jerusalem are ironically repackaged by Israeli real estate agencies as 'Arab-style'. Their factual history is camouflaged behind this architectural euphemism; their Palestinian memory erased.

This inspired the making of Dream Homes Property Consultants (DHPC), a nomadic real estate agency engaged with piecing together a vanishing world whose memory is submerged into forgetfulness by the narrative of power. To explore the torn social, cultural and intellectual fabric, I undertook oral history research with 28 Palestinian refugees and exiles from West Jerusalem. The departure point for our conversations was the memory of their usurped home. That delineated the path to re-trace their footsteps of displacement, dispossession and cultural cleansing. Echoing memory's complex cognitive language, I used a multitude of narrative forms to translate their individual recollections, our collective history.

In 2007, Alexandra Handal began working on her groundbreaking interactive web documentary art, Dream Homes Property Consultants (DHPC). With this work, Handal entered a new creative territory, one that had no existing platform or funding opportunity in the MENA region or the UK where she was based at the time, nor internationally. Handal did not let that deter her and set out to experiment with unconventional modes of documentary storytelling, dissolving the boundaries between visual art, film, design, literature, photography and digital media. Simultaneously, she was establishing discursive links between the arts and other fields such as: geography, architecture, urban archaeology, cartography, politics, memory and history studies. Handal built her work from the oral history fieldwork that she conducted with Palestinian refugees and exiles. To undertake this research, she used the protocols of academia, following a rigorous ethical framework. Her intent however was not to build a traditional archive, but to use this scholarly research to create new modes of narration, that expand the documentary genre. To that effect, it was necessary to seek a different type of production and distribution model to realise the work.

For the past nine years, Handal has been smuggling refugee stories across Israeli controlled borders, knowing that in the subsequent five years it would become increasingly difficult to meet Palestinians with a vivid first-hand account of life prior to al-Nakba. Of the twenty-eight participants of DHPC, four have sadly passed away, while others are in fragile health. Working with elderly people in a conflict zone, Handal felt a great sense of urgency, for she wished to preserve and make visible their marginal voices. It was vital that all interactions occur face-to-face between Handal and each participant, over the course of many years. By drawing on the polarity between creative expression and meticulous historical fieldwork, Handal initiates a narrative approach where individual and collective knowledge intertwine in a poetic and precise way. DHPC was built by connecting her own observations of the present-day divided city, to the knowledge transmitted to her by Palestinian refugees and exiles from West Jerusalem. The work is informed by the conversations that unravelled, from the friendships that transpired and from the intimate act of sharing. The unifying thread has been to attentively listen and care for this endangered knowledge, assigning art the role of safeguarding Palestinian social and cultural memory, which faces erasure under the Zionist occupation and colonisation of Jerusalem.

Viewed through the ironic lens of the imaginary real estate agency, Dream Homes Property Consultants offers visitors a moment of pause to consider the deep entrenchments of the two sides of this conflict and shepherds them into a heartfelt consideration of the deep sadness and loss that haunts the region and the people who remember it. MIT Open Documentary Lab

> Winner of the Second Prize Freedom Flowers Foundation Award, Luzern, Switzerland
The award jury evaluates the submitted artworks based on artistic originality, coverage of human rights as a topic, and potential impact on human rights awareness.

> Winner of the Lumen People’s Choice Gold Award, UK
The work was chosen in an open vote in September 2014 of the Lumen Online Gallery of 100 works with more than 1000 votes cast globally. The Lumen Prize Exhibition celebrates the very best art created digitally by artists around the world. Its goal is to celebrate the power and potential of this exciting genre through an annual competition and global tour of works selected by an eminent panel of judges.

> Official Selection, IDFA DocLab
26th Edition of the International Documentary Film Festival Amsterdam
Among the 15 projects selected in competition for Digital Storytelling
The mission of IDFA DocLab is to showcase interactive documentaries and other new digital artforms that successfully push the boundaries of documentary storytelling in the age of the interface.

Modern Art Oxford, UK
Oxford Israeli Apartheid Week 2015
Live Screening
'Picturing Palestine' is a unique screening of four award-winning short films by contemporary Palestinian filmmakers exploring life in occupied Palestine. A Panel Discussion by leading directors and academics will look at the portrayal of Palestine in art and media and how enabling a generation of Palestinians to take charge of their image and distribute it globally could impact their future. All profits will go to the Hoping Foundation.

> Lumen 100 Online Gallery
Over 750 works entered, 100 selected. All works are reviewed by Lumen's International Selection Committee, which is made up of academics, gallerists, artists and art historians from around the world.

>University of Sussex, UK
DHPC will be among the sources used for a course on early 20th-century Palestine that is taught by Dr. Jacob Norris

>My essay ‘Chronicle from the Field’ which reflects on the use of lived history in the making of Dream Homes Property Consultants was published in Oral History in the Visual Arts. It is considered the first book to investigate this subject, ed. Dr. Linda Sandino and Dr. Matthew Partington (Berg Publishers, UK).

>DHPC is among the 15 research-based art projects referenced in the essay by Dr. Iain Biggs, ‘Singing Across Thresholds, or: Notes on educating extra-academic and extra-disciplinary creative practitioners’ in the book, Artists with PhDs: On the New Doctoral Degree in Studio Art, edited by James Elkins, 2nd edition (New Academia Publishing, LLC)